Those working within research libraries will know that digital scholarship can be complex. As a loosely defined umbrella term, it can include a wide variety of processes, services, and applications from GIS and data mapping, to computational analysis, from the application of artificial intelligence to library processes, to research data management. As a result of its multifaceted nature, those working around digital scholarship within research libraries need a wide variety of ever changing skills to reflect the ongoing development of techniques, practices, and tools. These skills not only relate to increasingly complex technical processes, but also include more generic skills such as enabling effective advocacy, developing grant applications, and project management.

Although formal training programmes and courses are available, on a wide variety of topics relating to digital scholarship, not all of these are applicable to research library environments. They can be expensive and it can sometimes be difficult to translate classroom-based learning into real-world application and practice. As a result of these challenges, a number of bespoke and tailored training and skills development programmes have been created to support digital scholarship within research libraries and cultural institutions, at institutional, regional, or national levels. There is also a wealth of knowledge and expertise contained within the community, both the result of formal training, real-world experience, and self tuition.

How might we harness this wealth of collective expertise, knowledge, and experience for the mutual benefit of one another and the research library community?

Before answering this, we needed to know more about motivations.

The importance of skills development

The joint meeting began with an open question: why are we here? Why are we interested in developing our skills around digital scholarship processes and tools within research libraries? And how would a transatlantic skills exchange meet our skills needs?

Through a short Mentimeter poll, colleagues immediately identified that skills development was either quite (49% of respondents) or really important to them as individuals (40%). 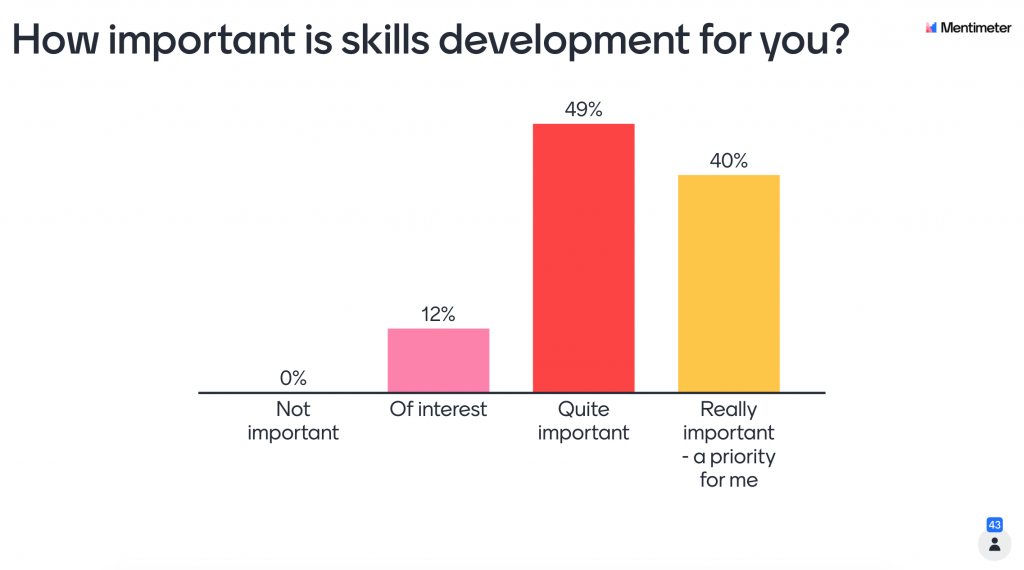 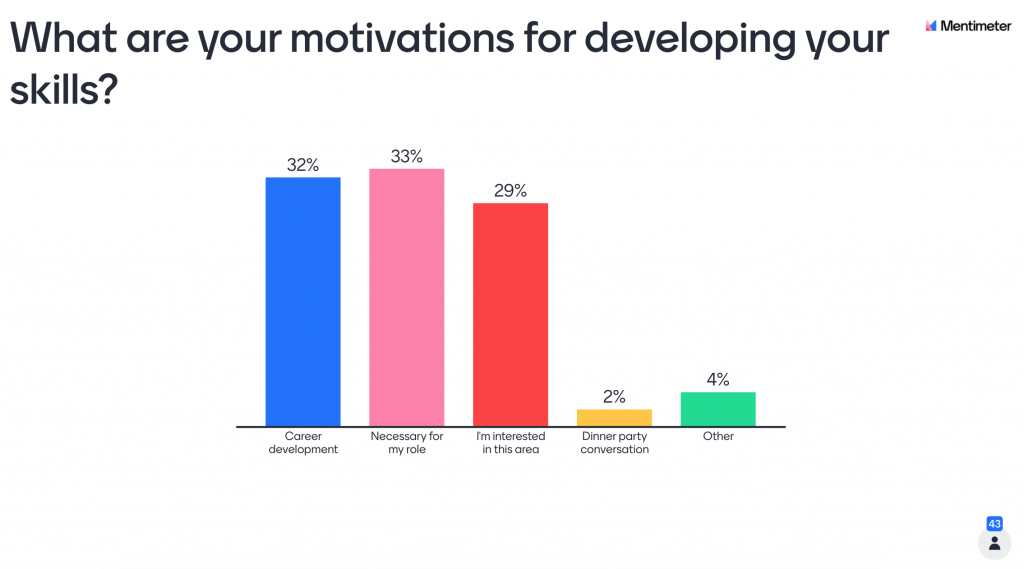 Having established that skills development was important to colleagues, and for a variety of reasons, our final question centred on where colleagues were currently receiving their training from. Potentially reflecting the diverse and emerging nature of many digital scholarship processes and projects, colleagues gave a variety of responses from that they relied on self-tuition for their skills development (29%), learnt informally from colleagues (16%), or received training from national consortia or associations (23%). 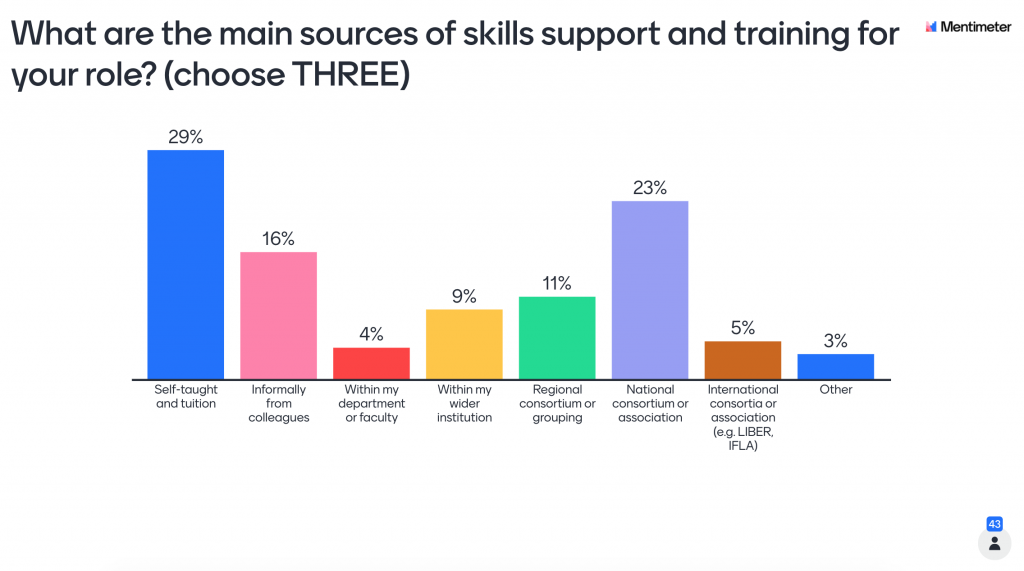 Immediately, from this short Mentimeter survey, we confirmed that:

The session then considered: what might a skills exchange comprise of and are there any models from which we can learn?

Colleagues from the DLF DDS outlined the success of their consultation model, which previously formed part of the DLF’s eResearch network. The DDS consultation model is centred on the mutually beneficial exchange of expertise centred around a specific challenge or problem posted by a colleague. It enables the creation of a community of practice of colleagues working in an area through which questions or challenges can be posed, and responses made by the community.

Getting to know one another…..

The majority of the session was then dedicated to one of the most important elements of a potential skills exchange: bringing colleagues together from different institutions who had a similar interest around skills.

Through a series of small group breakout rooms (consisting of 2-5 people), colleagues came together to share their own experiences and perceptions of digital scholarship within their institutions, the areas where they would like to develop, and the topics around which they might offer their expertise.

Through a series of slightly larger groups, colleagues then discussed what the potential benefits of establishing a transatlantic skills programme might be, the potential features of any such programme, whether there are good examples from elsewhere from which we might learn, and how it might be sustained. Through lively and enthusiastic group discussion, a series of jamboards were quickly filled with ideas and questions. 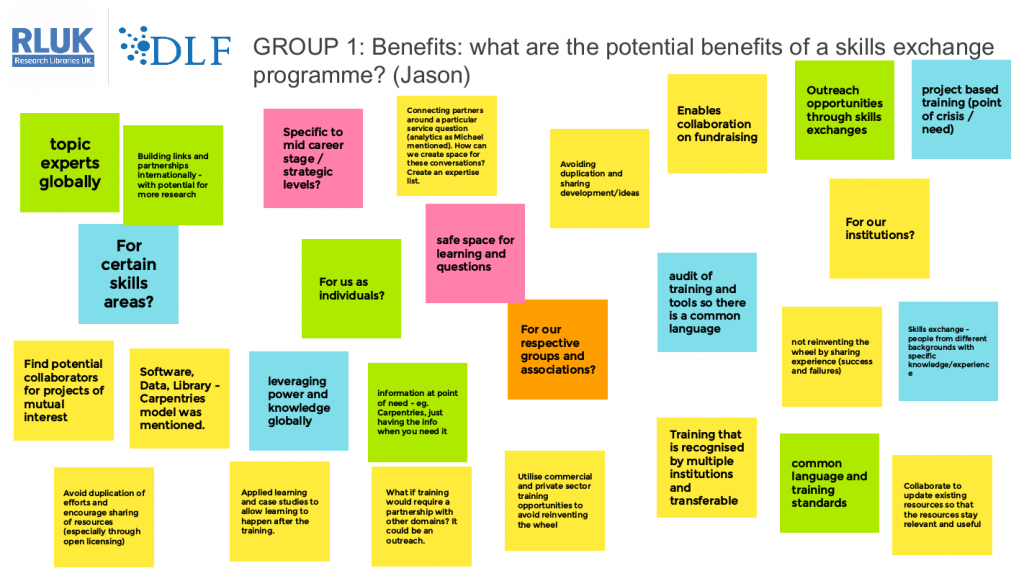 Expression of interest: join an international community of practice

Having established the collective enthusiasm for establishing such a programme, colleagues were asked to complete a short expression of interest if they were interested in participating in its first iteration.

So what happens now? Next steps?

Members of the DLF DDS and RLUK’s DSN were delighted by the positivity and enthusiasm shared on behalf of colleagues during the joint session. Colleagues embraced the opportunity of creating a transatlantic skills exchange programme that was community driven, providing a safe and supportive place to share ideas, thoughts, and most importantly, challenges and problems.

Colleagues commented that it was refreshing to be able to come together with colleagues from different institutions, from another country, and find that they were experiencing the same challenges and issues as they were.

Missed the discussion? catch up below!

The colleagues leading this work are: 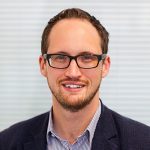 Matt is the Executive lead for the digital shift, digital scholarship, and copyright and licensing strands of RLUK’s strategy, Reshaping Scholarship. Having trained as a historian, and having previously worked in the archive and museum sectors, he has an interest in encouraging cross-sector collaboration between the information, cultural, and academic communities. He has a particular interest in supporting communities of practice to come together to explore some of the common challenges facing the research library community.