Last month saw the virtual Discovering Collections, Discovering Communities (DCDC) conference which brought together around 400 professionals from across the library, archive, academic and cultural heritage communities. The conference took place on 11th-15th July 2022 and explored how digital and inclusive innovation is transforming the cultural heritage and academic sectors and their relationship with their audiences. This year’s event was jointly organised by The National Archives (TNA), Research Libraries UK (RLUK), and Jisc.

As part of the conference, the RLUK Decolonisation Group, consisting of members of two RLUK networks – the RLUK Special Collections and Heritage Network (SCHN) and the Collections Strategy Network (CSN) – organised a round table aiming to highlight examples of EDI good practice in archives, libraries and beyond. Three presentations, in the form of short provocations, covered learning from research library programmes and GLAM initiatives and provided the basis upon which conversation was built. Rachel Minott (former chair of the Decolonising Guidance Working Group for the Museums Association, and current Inclusion and Change Manager at the National Archives) reflected on chairing the Museums Association Decolonising Guidance working group through the start of the Covid-19 pandemic, alongside the co-creation of a Risk Assessment for Communicating Potentially Upsetting History and a Matrix for Inclusion for the Archive Sector.

Some words have become politicised - 'decolonisation', 'white privilege'. So @rachaelminott says lead with the definition, the word is not the practice #DCDC22

Mel Bach (Slavonic Specialist and Head of Collections and Academic Liaison, Cambridge University Library, and convenor of the Cambridge University Libraries Decolonisation Working Group) provided a summary of decolonisation activities and challenges in Cambridge libraries. In particular, she focused on current work to address imperial legacies in Cambridge collections in the context of Russia’s war against Ukraine. Finally, Carissa Chew (History PhD Student and Teaching Assistant at the University of Hawai’i, and former Equalities, Diversity and Inclusion intern at National Library Scotland) shared the rationale behind the ‘Inclusive Terminology Glossary’ which she developed as part of her internship at the National Library of Scotland. The glossary constitutes a tool that heritage professionals can use to identify and, when appropriate, replace discriminatory and outdated terminology in catalogue records and beyond.

Delegates, apart from participating in the discussion, had also the opportunity to complete a short Mentimeter poll which aimed to capture their interests around decolonisation as well as add their thoughts and comments on a number of issues around decolonisation and institutional and professional practices in Google Jamboards. Based on the poll results, which was completed by 34 participants, the majority of those completing the survey came from the academic and library sectors. There were also some participants from the archives and heritage sectors, one respondent from the museum sector and another one from the commercial sector.

Regarding their interests with regards to decolonisation, cataloguing and metadata, exhibitions and display of collections, as well as collection development were the three top areas of interest as voted by the survey respondents. Community engagement and curriculum development were in fourth and fifth place respectively, while strategy development, reading lists, and ‘other’ were at the bottom of the ranking. Delegates were also asked if their institution was currently engaged or planning to be engaged in decolonisation activities; the majority replied positively to this question.

However, when asked about who drives or will drive relevant initiatives, the answers varied. In most cases, either the university or the library was driving or planned to drive the decolonisation initiatives. Some participants said that the archive was leading relevant activities, while personal interest and academic/ user interest also seemed to play an important role in driving decolonisation in several cases. Fewer respondents said that the museum was leading decolonisation activities or chose ‘other’, while there were two cases where the question was not applicable. Yet, these responses should be viewed alongside the information related to the sectors where respondents belonged to. As the majority of those completing the survey came from the academic or library sectors, this has probably had an impact on the results of this question, showing the university or library to be leading initiatives around decolonisation in most cases.

A really good discussion happening at the #DCDC22 session on inclusivity and diversity. Thankful for the resources being shared including @CHTNUK and the Inclusive Terminology Glossary. We have a lot of work to do in #archives but it’s nice to see people making such a difference.

Excellent final session at #DCDC22 around EDI. Fabulously honest and insightful comments from @carissa_chew @bibliofilka and @rachaelminott with great chairing from Sally Bell

Moreover, most delegates said that their institution has not provided training for them or other staff about decolonisation which may to some extent explain why several professionals engaged in decolonisation activities were not completely confident about what this meant in terms of their job. There were some institutional cases where training had been provided either for some or all staff members whereas, in two cases, institutions had not provided relevant training but were planning to. Three survey participants chose ‘other’ and, another three, said that the question was not applicable to them. Almost all delegates completing the survey said that they would be interested in attending a series of events, exploring issues around collections, decolonisation, and EDI. 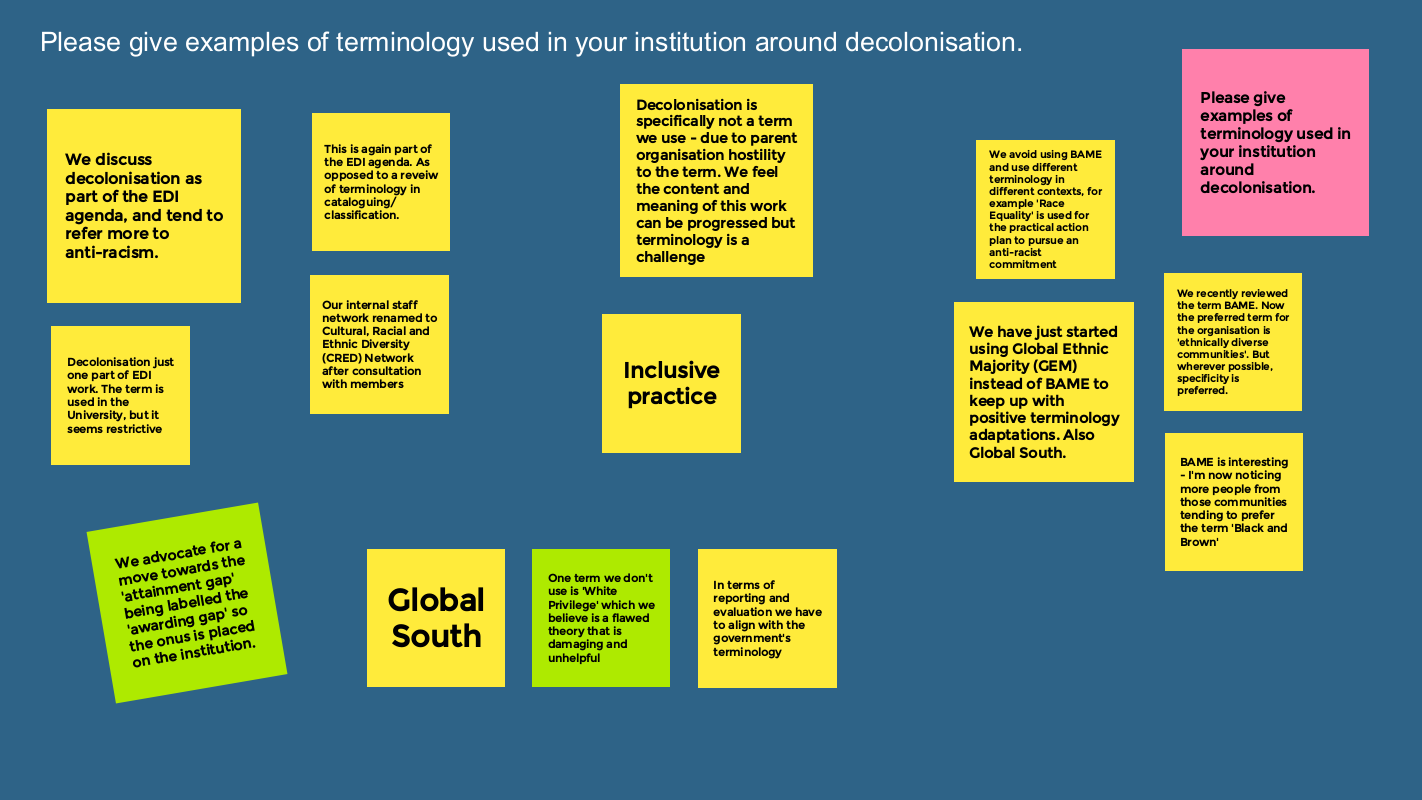 Contributions in Google Jamboards showed an increased interest in decolonisation by professionals across the GLAMA sector. They also revealed that a range of initiatives designed to support decolonisation and EDI more broadly are currently taking place in library, archive, museum, and other heritage and higher education institutions. More specifically, through the Google Jamboards, delegates reflected on how decolonisation is organised in their institution, including sharing information on who is leading related activities, how much time is allocated to them, and the type of terminology used around decolonisation. Finally, attendees had the opportunity to share their thoughts on how we can best record and share good practice, the types and formats of decolonisation training that is currently needed, as well as share examples of good practice around decolonisation (e.g. guidance, training, engagement) from their institution and beyond. A discussion based on the data collected through the Google Jamboards took part during the second part of the session and was captured in the recording of the round table.

RLUK would like to thank all those who participated at the event and provided their feedback, thoughts, and comments. The data collected through the Mentimeter poll and the Google Jamboards will be used to shape a series of events around decolonisation, starting in autumn 2022, as well as inform further activity in the area which will be led by the RLUK Decolonisation Group.