Dr Scally is currently Director of Library and University Collections at the University of Edinburgh and takes over from Martyn Wade who retired at the end of March. 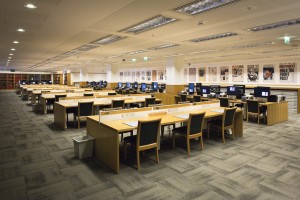 Dr Scally is returning to where he started his library career in 1993 when he was appointed as a curator in the British Antiquarian Division at the National Library. He joined the University of Edinburgh 10 years later as Director of University Collections and Deputy Director of Library, Museums and Galleries, moving on to his current role in 2012

NLS Chair James Boyle said he was ‘delighted that the Library had been able to recruit someone of John’s calibre and experience to this important role.’

‘John impressed the interview panel with his understanding of the challenges facing libraries today and his imaginative ideas on how NLS can best respond to these. As one of the leading library professionals in Europe he brings vision, great experience and enthusiasm to this role which will greatly benefit NLS in the months and years to come.’

Mr Boyle said Dr Scally will work with a Board which recently recruited seven new members. ‘The new Board members are already making their mark and we are all looking forward to working with John to move things forward. These are exciting times for NLS.’

‘The National Library of Scotland is a key national collection of international renown. As a cultural and research centre on Scotland and the Scots it is among the best research and reference libraries in Europe. In providing free public access to over 24 million items it is an important part of our cultural and literary heritage and future. I welcome Dr John Scally’s appointment as Chief Executive and National Librarian. Under his leadership the Library will continue to respond to the challenges and opportunities of the digital era and provide an excellent service to a growing audience for the Library’s collections.’

Dr Scally said: ‘It is a great honour and privilege to have been appointed as the new CEO and National Librarian of the National Library at this important period in its long and illustrious history. It is my ambition to make the National Library a multimedia hub for learning, research and inspiration. Libraries in Scotland have played a vital role in the education and cultural development of the nation, and I see that continuing in the decades to come. I am thrilled to be returning to the institution where I learned my trade as a young curator and very much look forward to working with the excellent staff and the renowned collections, in order to make Scotland’s National Library one of the very best in Europe.’