RLUK has published a report on The role of Research Libraries in the creation, archiving, curation, and preservation of tools for the Digital Humanities.

It is widely accepted that research libraries play an important role in facilitating academic research and teaching. However, given the technological advances of the last few decades, this role has been continuously transforming; the fundamental changes that information technology has brought to various academic fields, such as the Arts & Humanities, can be regarded as one of the reasons.

The emergence of Digital Humanities, in particular, raises new challenges for libraries. Yet, previous research has mostly focused on the role of libraries in supporting scholarship rather than in their role as collaborators in its creation. Also, as most of these studies have been conducted with US libraries as their main focus, the UK academic library landscape has remained largely unexplored.

For this purpose, RLUK issued the ‘Research Libraries and Digital Humanities Tools’ project which aimed to explore the role that member institutions play in the creation, archiving, curation, and preservation of tools for Digital Humanities research, along with the models of involvement they employ in this type of scholarship.

Based on the results, we argue that there is a role for libraries in the creation, archiving, curation and preservation of tools for Digital Humanities research, mainly as a collaborative activity between library professionals and researchers in the field.

Some of the main issues raised in the project report are: 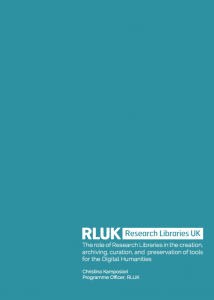 RLUK is a consortium of 37 of the most significant research libraries in the UK and Ireland, whose purpose is to shape the research library agenda, and contribute to the wider knowledge economy through innovative projects and services that add value and impact to the process of research and researcher-training. RLUK’s mission is to work with its members and partners, nationally and internationally, to shape and to realise the vision of the modern research library.