What is TCD’s institutional context?

Trinity College Dublin (TCD) was created by royal charter in 1592 and modelled on the Oxbridge system. It is home to 18,000 students across all the major disciplines in the Arts and Humanities, Business, Law, Engineering, Science, and Health Sciences. It is ranked 155th in the world according to THE. The College’s Strategy to 2025 positions research ‘at the heart of the university’ with an emphasis on transformative, investigator-led work that is fully sustainable.

There are three elements to TCD Library: a world- renowned, unique, and distinct collection within an historic monument; UK and Irish legal deposit; contemporary collections for the students and researchers. There is a strong emphasis on integrating the library across the academic community and beyond.[1] 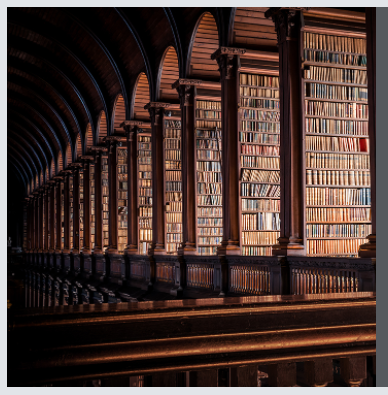 TCD has the first capital campaign of a university in Ireland underway. The Library is one of three flagship projects, not just for the Old Library Redevelopment, but also for the ambitious digitisation initiative that is the Virtual Trinity Library. The vision is for their unique and distinct collections to be made accessible around the world, as well as conserving and researching the collections. Every category (there are nine) has an academic lead. The new President/Provost is one of them; the previous Vice-Provost and Seamus Heaney Professor of English is another.

What is the ‘collaborative context’ for TCD?

As part of its shift toward digital, TCD Library was in collaboration with the University’s Drama department and a major Computer Science group (led by a previous research scientist of Disney Research) that resulted in a virtual reality rendition of the Long Room featuring a volumetric video of Jonathan Swift (played by actor Jonathan White). The scenery was built using a combination of manual modeling and photogrammetry and involved audience/ux research of AR and VR.

The Library has significant partnerships with academics at TCD, including areas such as Computer Science and Education and specific College research groups such as TILDA, The Irish Longitudinal Study on Ageing. TCD’s Librarian, Helen Shenton, is co-chair of an ad-hoc task force on Open Scholarship with the Dean of Research (now the Provost/President-elect).

The one-year programme, called ‘Unboxing Open Scholarship’, focuses on Open Scholarship and Citizen Science, with c.1,000 people participating in the different events. Its key question relates to TCD’s appetite – does the organisation want to be a leader or a follower, or something in between? At the time of the research, the National Open Research Forum (NORF) was also just starting. Open Scholarship is an area where the Library is a key partner, also through LERU (League of European Research Universities) and the LERU ‘Roadmap to Open Science’. In a joint initiative between the Dean of Research and the Library, the College has joined the Irish ORCID.[2] An aspirational flagship project detailed in the new research strategy is the proposed Trinity Citizen Scholarship Platform, which will inspire the public to engage in TCD research. The Library will take a leading role in making unique content available on this platform. 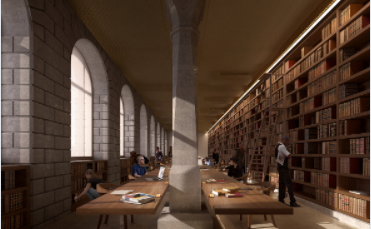 A new Research Collections Study Centre will provide national and international scholars with a secure and accessible environment to intimately study the unique and distinct collections. Located in the beautifully colonnaded ground floor, the Study Centre will overlook Library Square, one of the original historic courtyards at Trinity College. It will be a visible testament to the University’s commitment to research, innovation, and widening access to its collections. Image supplied courtesy of Heneghan Peng Architects. Copyright the Board of Trinity College.

The Library was heavily involved in setting up the Trinity Long Room Hub, one of TCD’s five flagship research institutes, dedicated to promoting and facilitating excellence across the Arts and Humanities community in the College. International collaboration between TCD Library and libraries in other countries is also to the fore, as for example with the Royal Library of the Netherlands (KB) and the Fagel Collection, one of the key initiatives in the Virtual Trinity Library.

What skills and staffing are required for effective research?

The above examples describe close partnership working within the institution between the Library and the academic community, as characterised by the close relationship between the Librarian and the Dean of Research. The Librarian is also on the College’s Research Committee, the place where all the Directors of Research meet and work. The Library was involved in the development of the new Research Strategy [3, 4].

There are also ‘embedded librarians’ (as is the case at Harvard), where librarians are part of the research teams, especially in Health Sciences. This approach works well across a range of disciplines, from medical sciences to arts and humanities subjects.

What is the future of research at TCD?

TCD Library’s strength lies in collaborative or translational research. In the future, there may be a need to redefine activities such as cataloguing in order to ensure that resources can be obtained to carry out necessary new work. Several library staff members have doctorates, and work in partnership with academics to develop new undergraduate and postgraduate courses, for example, the new cross-disciplinary MPhil in Medieval Studies draws on the Library’s collections and is an early candidate for research and digitisation under the Virtual Trinity Library. Research into enhanced technology, such as Transkribus (AI transcriptions) and IIIF, also flows from these projects, in partnership with faculty. The Subject Librarian team deliver a plethora of instruction on, for example, research methodologies. 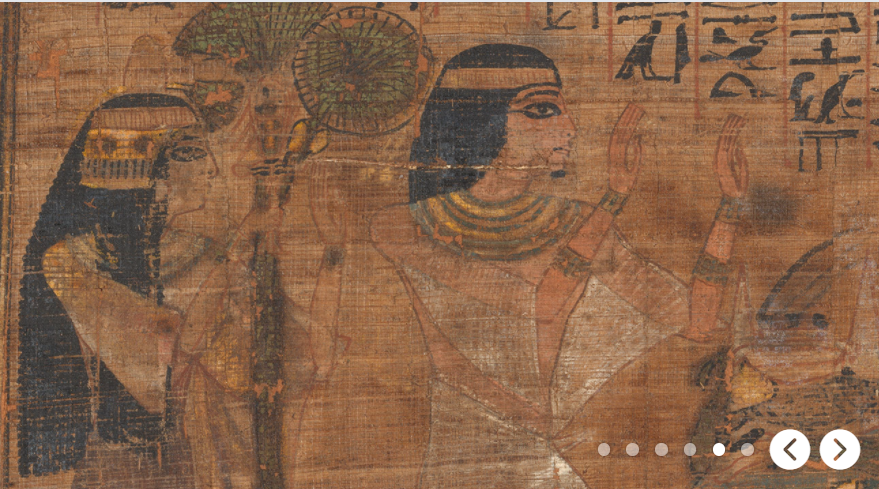 Global Culture: Papyrus and Objects.
Because Trinity scholars have always been deeply involved in European research initiatives, much original research material has been acquired by the Library from far-distant European and Asian lands reflecting global culture through the ages. Image supplied courtesy of Digital Collections, the Library of Trinity College. Copyright the Board of Trinity College.

The radically new Library Strategy 2015-2020 is, in effect, a new fifteen-year strategy, which was created in conjunction with the academic community. The completion of the Strategy was preceded by a year of public debate, including a final symposium with experts such as Stanford University’s Librarian Mike Keller and Chief Executive of the British Library Roly Keating.[20] The Strategy’s starting point was that TCD Library is at the very heart of the campus, literally and figuratively.

The document includes phrases such as ‘catalysing research’, ‘accelerating research’, ‘moving toward being partners in research’. The recent launch of the Virtual Trinity Library (and related creation of 20 new jobs) is one of the new strategy’s flagship projects, ‘forming part of the University’s philanthropic campaign … and is complementary to the Old Library Redevelopment Project, which addresses the physical rejuvenation of the Library’.  The next steps are revisiting the Strategy (‘strategy lite’) and five-year implementation plan and further work with the University and the wider community on the fundamental issues identified in the university’s new Strategic Plan, especially around the UN Sustainable Goals.