Back to the future: reflecting on the Libraries of the Future

In any time of accelerated change it is tempting to look forward and imagine what a future world will look like. A constant theme of the past couple of months is that ‘nothing will be the same again’, the view that there have been a number of enforced shifts in our behaviour that will result in permanent changes to our lives. It will be intriguing to see if this is true – or if the elastic pull of our old lives will be so strong that we revert to previous behaviour as social distancing becomes forgotten, restaurants and bars open, and travel restrictions are lifted. In HE it is tempting to think that greater home-working, greater distance learning, and greater demands for openness of resources could be permanent changes.

Sometimes to see into the future it is worth looking back to the past. At the recent (virtual!) meeting of RLUK’s Associate Directors Network, Diane Job (University of Birmingham) reminded us of the Libraries of the Future project from 2010/11. A collaboration between RLUK, SCONUL, the British Library, Jisc, and RIN, Libraries of the Future sought to look beyond a limited time horizon and consider scenarios describing what HE libraries might be like starting ten years hence – that is, from 2020…

The project reviewed a number of axes along which to consider the future and determined on two main variables – whether HE values were open or closed, and whether the emphasis was on public or private funding of research, teaching and learning. By thinking along these axes three potential scenarios were developed (source):

The phrase ‘Wild West’ has entered colloquial use to describe any situation that has a no-holds-barred, free-for-all flavour.  This world is dominated by capitalism and corporate power, including the HE sector.  In this world private providers compete with each other and the state to offer students educational services, including information services and learning material. The power lies in the hands of the consumer who is able to pick and choose from courses and learning materials to create a personal educational experience.

‘Beehive’ is intended to draw obvious parallels with the hierarchical and structured life of the bee colony, where all is ordered to ensure the common good of the whole community. The Beehive scenario is a world in which society and HE have open values and the state is the primary funder and controller of HE. Its overriding aim is the production of a skilled workforce, and to this end it has created a largely homogenous HE system for the masses while allowing the elite to attend the few traditional institutions. A limited market is used to provide competition within the HE system to drive up quality.

A ‘Walled Garden’ is an oasis, shut-off from the outside world. Inhabitants of the garden neither know nor care much about the world beyond the garden’s comforting walls.  HEIs in this scenario are ‘Walled Gardens’. The closed nature of society makes HEIs insular and inward-looking, isolated from other institutions by competing value systems. Provision of information services in this world is as much concerned with protecting their own materials from others as it is in enabling access.

Under each of these scenarios were potential implications for content services, other library services, and librarian skills and staffing.

Looking back, it is interesting to think about what has shifted and what hasn’t changed. After ten years of a Conservative government, many of those under austerity, it is fascinating to see that we are not significantly further towards the ‘wild west’ scenario – there are few new public providers in the UK and it could be argued that state control has become if anything stronger, with the Office of Students, Prevent legislation, caps on student numbers, TEF, etc. Students may behave more like consumers, but the range and nature of the products they can consume – three and four year undergraduate course, for example – have not changed significantly.

Most of the fundamental models for content provision have also not changed too much. There has been a significant increase in spend on APC-gold open access, but we still see year-on-year increases in total journal subscription spend. And, as the current situation clearly demonstrates, we still do not have affordable, at-scale models for e-books and e-textbooks.

Some of the future gazing now looks delightfully naïve:

All the scenarios assume that at some point beyond 2020 libraries will have made significant progress towards completing the digitisation of paper-based records. Practically all scientific books, papers and other records post 1900 will have been digitised. Arts and humanities materials will have the majority of post-1950 books, papers and records digitised.

At ‘some point’ still feels a long way off. Perhaps at that time we underestimated the completely disabling effect that the UK copyright regime has on our ability to digitise, especially the C20th black hole.

One positive is that I don’t see any real evidence that we have retreated into the Walled Garden approach. There is still a ‘sector’, particularly so with the library community. The notions of collaboration and cooperation are still strongly embedded within our values. However, it is clear that we can go further. One big shift in the past decade has been the changing role of Jisc and their scaling down of large projects. It feels that we have not yet found a way of replicating that funding through collaborative projects. This will be even harder to do over the next few years if some of the scenarios being planned for in university finance departments come to pass. But if we want to thrive in a new normal we need to work together collectively to shake off those restraints (restrictive IP regimes, unaffordable business models, etc) that were straining in the shift to digital and that have proved totally unable to respond to the current situation.

Over the past few months RLUK has been looking at some of these issues as part of the Digital Shift strand in our strategy. We recently launched a Digital Shift Manifesto (www.rluk.ac.uk/digital-shift) and we will be pursuing a programme of activity to take these issues forward.  This work has taken on greater urgency as we have moved to a lock-down situation and the need for the digital is ever greater. We have been working with RLUK members throughout the crisis to explore how the current situation represents the digital shift in action and we will publish a report summarising these conversations in May.

It is a coincidence, but a fitting one, that we are launching the Digital Shift Manifesto this year, the first year of the ‘future’ envisioned by the Library of the Future. I hope that we can help move us to a world where ‘all is ordered to ensure the common good of the whole community’! 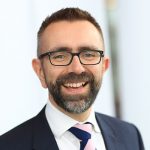 David has a long-standing interest in open access and the implications of wider open scholarship on library services and provision. He is also interested in how coordinated action around collections may better serve the needs of researchers.