A vibrant community consisting mainly of librarians, but also including archivists, museum and technology professionals, publishers and researchers from across Europe was brought together in Patras, Greece at the beginning of this month (5-7th July 2017) for the LIBER 46th Annual Conference. The theme of this year’s event was ‘Libraries Powering Sustainable Knowledge in the Digital Age’. 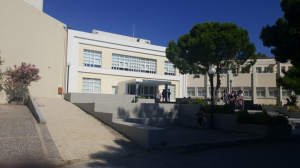 To begin with, it is worth referring to LIBER’s new 2018-2022 strategy which, apparently, constituted the inspiration behind the theme of the conference and it was one of the primary topics under discussion throughout the event. More specifically, LIBER’s strategic vision is to enhance the research library’s involvement in innovative scholarly communication, make it a hub for digital skills and services, and strengthen its role as partner in research infrastructures; by participating at the Knowledge Café during the conference, delegates had a say on the development of the activity roadmap based on the strategic areas. Accordingly, the structure and content of the conference aimed to explore topics related to these future directions for research libraries. 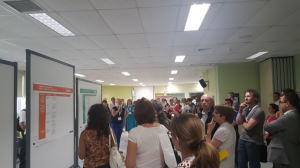 During the first day, delegates had the chance to attend a range of workshops, which kick-started the event; I attended ‘The Digital Humanities Landscape in Europe’ which constituted the first meeting of the LIBER Digital Humanities Working Group. Given RLUK’s strategic interest in the area of digital scholarship and on the role of research libraries in facilitating it (relevant work includes our recent report on Research Libraries and Digital Humanities Tools), this was a meeting I was very much looking forward to. The areas that will be explored by the working group are skill-building of librarians in Digital Humanities, policies and portfolios of libraries in Digital Humanities, cooperation with the research community, and the roles of libraries & raising awareness; I am pleased to announce that RLUK will be contributing in the discussion around the last two areas on which we hope we will be able to report more in the immediate future. 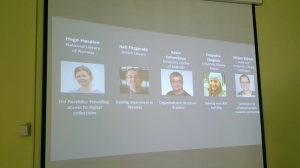 The working group subject areas and their representatives

Besides the engaging workshops, though, conference participants enjoyed the excellent keynote talks (the videos and the speaker bios can be accessed through the link) which aimed to inspire as well as generate debate around issues that concern the library community (and beyond) across Europe. The first keynote speaker, Dr. Filippos Tsimpoglou (Director of the National Library of Greece) talked about the steps undertaken towards the library’s transformation, the difficulties faced throughout the process and the plans to re-engage with the scholarly community and the public audience in a digital era. Kathleen Shearer’s (Executive Director of COAR) eloquent talk looked at the prerequisites for creating a sustainable future for scholarly communications as well as the challenges for achieving it. Based on her presentation, some of the steps towards this goal entail re-shaping the research agendas, addressing the problems associated with big deals, building next generation repositories and developing greater collaboration across communities of interest. 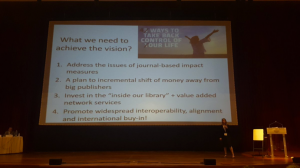 The next keynote speaker, Michael Ambjorn (CEO of Historypin), delivered an interactive session with the aim of triggering discussion around storytelling as a method that research libraries can employ to respond to the increasing demand for engaging with different audience groups – as we were informed, this was the session with the largest number of participants, simultaneously, taking part in this experiment. Finally, the much anticipated talk by Julia Reda (Member of the European Parliament) raised issues around the EU Copyright Reform, explaining the current landscape and highlighting how future discussions and decisions may affect organisations, such as universities and research libraries, as well as individuals, such as researchers and the general public. She argued that co-operation across communities and sectors (e.g. business, academic, cultural, public) is needed in order to ensure that knowledge is sustained for the future in an accessible way for all. 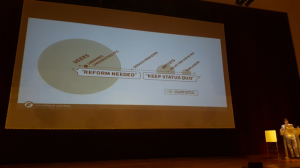 Regarding the rest of the sessions, delegates had the opportunity to attend talks on a variety of topics that are of interest to the modern day librarian and information professional. The themes of open access, open science and citizen science were amongst the most popular, often examined alongside topics such as publishing, audience engagement, metrics, research data management, copyright, linked data, infrastructures, and digital scholarship. On the other hand, the poster session offered an alternative way for participants to critically think about many of the aforementioned areas, as bite-sized chunks of information around related projects and ideas were presented in visually stimulating ways. 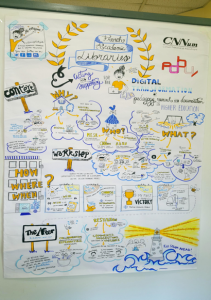 Cécile Swiatek (adbu, France) was the winner of the LIBER 2017 poster competition

Yet, apart from the interesting talks, workshops and fruitful discussions, the conference programme offered several networking opportunities, such as the conference dinner and reception as well as various pre- and post-conference activities which were hugely enjoyed by the delegates. Overall, this was deemed a successful event and a very pleasant, first experience for me at a LIBER conference. Congratulations to the organising committee!