In 2011, John MacColl, University Librarian, organised and challenged a new working group to address the enormous backlog of uncatalogued early printed and rare books held by the University of St Andrews. At the time, the Rare Book Collection, numbering close to 210,000 volumes total, had less than a quarter of its total books represented on the Library’s online catalogue. The University Library had employed a Rare Book Cataloguer in the summer of 2010 to create full-level DCRM(B) records for two 16th and 17th century named collections, and was averaging around 2,000 records created per-year; a rate which would have taken almost 75 years to complete the retro-cataloguing of the entire collection. This was not a sustainable method to approach the problem of the backlog; however, the University could not afford to employ a team of fully-qualified rare books cataloguers. The working group, comprised of MacColl, Norman Reid (Head of Special Collections), Janet Aucock (Head of Cataloguing), Elizabeth Henderson (Rare Books Librarian), Daryl Green (Rare Books Librarian [Rare Books Cataloguer at the time]) and Jeremy Upton (Deputy Director of Library Services) with consultation from Jennifer Schaffner (OCLC Research Program Officer), was tasked with coming up with a creative solution to solving the ‘backlog’ problem in a time frame of 10 years.

Lighting the Past was officially launched in June of 2012, while the working group was devising a unique two phase approach that would provide an efficient and accurate way of dealing with this large backlog within the next ten years. Key to the University’s support of this project was also the provision of opportunities for the employment and training of St Andrews students and potential internship and short-term project work for new Library and Information Science professionals. Lighting the Past’s two-phased approach looks something like this:

During the 2012-2013 period, Phase 1 process for Lighting the Past was time-trialled and honed down to a workable scheme. By the spring of 2013 the work was approved and we received permission to staff the project and commence work. In May 2012, Briony Aitchison (PhD St Andrews, MSc Robert Gordon University) was appointed as Lead Cataloguer for Phase 1 of Lighting the Past, whose first tasks were to scope out the work for the next five years and to hire a team of student cataloguers to train and set loose on our collections.

One of the main tenets of this project was to employ student workers (both undergraduate and postgraduate) not only to give them the opportunity to work with the collections but also to enable us to put money back in to the student community. We advertised the posts via the internal Student Jobshop, and received plenty of interest, including some from non-students. We initially hired six people for the summer of 2013, but once the academic term started and most people wanted to drop their hours we hired an extra student to complete the team. The students which we’ve employed have come from the undergraduate and postgraduate communities, studying a diversity of subjects from creative writing and philosophy to history and museum studies.

Cataloguing work under the Lighting the Past project officially began in June of 2013. In order to process a collection, the team first ‘flags’ a collection (taking pre-printed barcodes for items already on the online catalogue, attaching them to acid-free flags, and then inserting them in the correct volumes) which then gives an immediate visual indication that the item was already on the system and not in need of a Phase 1 catalogue record. The Lighting the Past team then simply pull from the shelves any items without these barcoded flags, knowing these require cataloguing.

In order to aid the student workers in the cataloguing process we created a MARC template for each collection in our Library Management Software, Millennium (Innovative). Fields common to every item, such as ownership and additional author fields for donors are already completed. Fields which the team are required to edit (such as title and imprint) have in them the required information in square brackets; for instance, the author field has “[last name, first name].” The aim of the student is to either complete all the relevant fields containing square brackets, or to delete the field if it is not relevant. We wanted to be able to make the process as simple as possible, without student workers needing to understand how MARC fields operate.

In addition to using a template, each team member also has a Guide to Phase 1 Cataloguing, a document which we drew up not only to assist the training of each team member, but also as a reference tool for the student worker. The main body takes the cataloguer through the process of creating a monographic record step by step, followed by the differences to expect when dealing with a multi-volume set, bound-withs, offprints, and monographic series. Over the last year this document has undergone many revisions, driven by the questions asked by the student workers, and by the different types of materials encountered (for instance, the appendix now includes guidelines for completing the pagination of an unpaged volume, as well as for a single sheet publication). 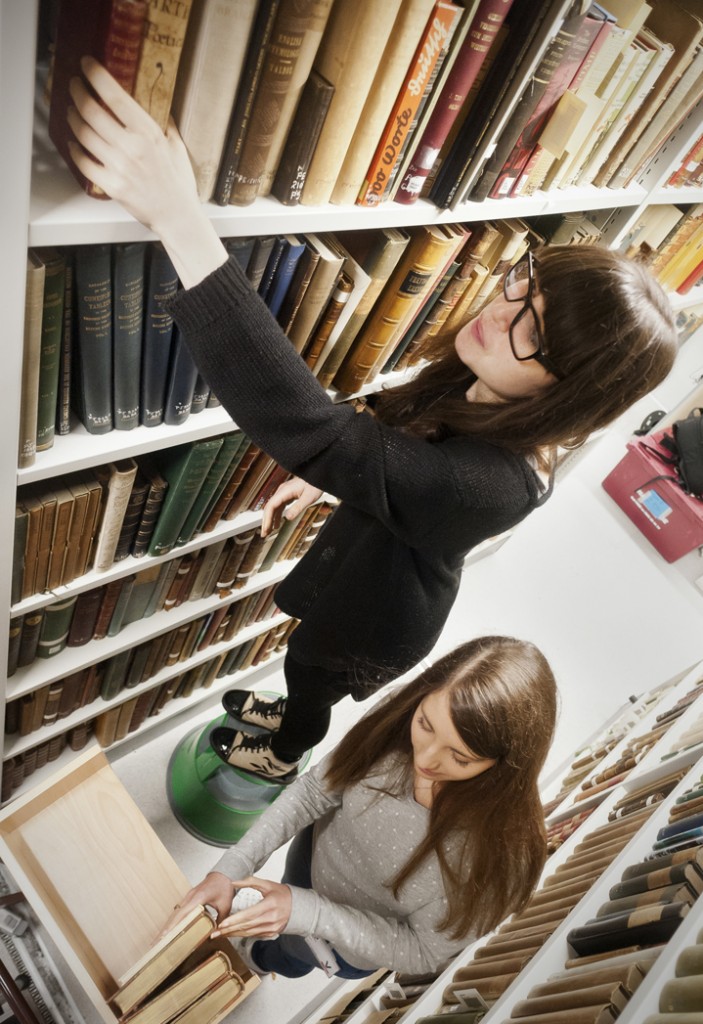 The University of St Andrews Special Collections contain many collections, and a decision had to be made about which ones were going to be tackled at Phase 1. Thirteen collections were initially identified for Phase 1 cataloguing, ranging in size from 114 to 9,735 items to be catalogued. Once we had a completed list, we scoped each collection in order to identify any potential problems, such as foreign language material, early printed books, Fraktur typescript, pamphlets, bound-withs, and serials (which only the Lead Cataloguer would be dealing with). The Fraktur typescript was problematic at first, but with the aid of an online chart, and the gained familiarity over time, it no longer presents such a problem.

Time-trials of the process initially projected the possibility of cataloguing 6-8 books per hour. However, in reality the Lighting the Past team are actually only cataloguing 3-4 books an hour. Foreign language material slows the team down as they spend more time checking their work, and some multi-volume sets require a contents note to make access easier for readers. Yet even working at this slower pace Lighting the Past have created a large number of records; to date 14,178 bibliographic records and 17,911 item records have been created. The Phase 1 team have completed five named collections in full and the folio sections of another four collections. The team has just recently completed the general Reserve Collection, the second largest for Phase 1, creating 6,594 bibliographic records and 9,302 item records; they have now started on the Donaldson Collection, the largest for Phase 1, with 9,735 items identified as not on the system.

Once these records are complete and live on the Library’s online catalogue, these records are uploaded to COPAC and to WorldCAT in order to provide the maximum level of discovery. Another great achievement of Lighting the Past is the number of items being reported to the English Short Title Catalogue (ESTC). Since the beginning of the project the team has reported a total of 791 items to ESTC: 459 new holdings, 307 holdings verified, and 25 unique new records to be added to the database. Many of these are held in our Reserve collection, with a total of 133 items being reported in October alone this year.

Lighting the Past is a project which has developed and grown over the last year. As collections are being assessed, and the ability of the team develops, further collections are being added to this project, such as the folio material of the 1861-1900 Monographs Collection. Additionally, the decision has now been taken for the Lead Cataloguer to undertake classification of non-classified material. As such work has now begun on the remainder of the Crombie Collection, comprising some 2,045 unclassified items. Lighting the Past was envisaged as a five year project, and our most recent calculations indicate that the first tranche of Phase 1 should be completed around the beginning of the September 2016, just over three years after the start of the project, with a goal of close to 70,000 items catalogued in total by the end of the project in June of 2018.

For more information about Lighting the Past, visit the University of St Andrews Library’s Special Collections Division website, or keep up with our progress on the Division’s blog, Echoes from the Vault.