Report: The initial responses of RLUK member libraries to the Covid-19 crisis

From the onset of the Covid-19 crisis, RLUK has been working to support its members, and the wider higher education community, through a number of activities. The immediate reaction of RLUK member libraries to the crisis, and those of their parent institutions, provided valuable information regarding the role of the library and how it is perceived within its parent organisation, and we have summarised these responses in the report below.

This report was originally published in April 2020, and initially made available to RLUK members only.

During the Covid-19 crisis, RLUK member libraries worked tirelessly to ensure the continuity of library services whilst protecting the health of their staff and users. The immediate reaction of member libraries to the crisis, and those of their parent institutions, provided valuable information regarding the role of the library and how it was perceived within its parent organisation. During the escalation of coronavirus within the UK, and during February and March in particular, RLUK member libraries prepared for a variety of scenarios, represented the concerns of their staff and users within their organisations, and adapted to a rapidly changing situation. This period highlighted the importance of making the library’s voice heard within its institution, the value of internal advocacy, and the important role that knowledge sharing between libraries can play in decision making.

This report offers a short summary of the immediate responses of member libraries to the Covid-19 crisis. It has been informed by:

The purpose of this report is to provide a short overview of some of the key strands of discussion, to collate these into a single space, and to surface lessons learnt. This briefing will be supplemented with additional intelligence over the coming weeks. Although the Covid-19 crisis affected all of RLUK’s members, this report largely relates to the experiences of its university members within the UK and their experiences leading up to library closure.[1] It is worth noting that the experience of these university members was not uniform. What this report seeks to do is draw out some of the key experiences of members in the weeks leading up to library closure, giving an illustrative picture of events and discussions, and noting when these only applied to a selection of members.

From early February 2020 it became apparent that Covid-19 had the potential to have a significant impact on the work of UK universities and their libraries. Following the first confirmed case in the UK on 31st January (in York), universities began a campaign to encourage enhanced personal hygiene and cleanliness in line with emerging government advice.

The high-usage and prominent position of RLUK member libraries on campus, within their institution, and on the national information and cultural landscapes, meant that the library provided multiple points of transmission should the spread of the virus become significant. Across February and March, concerns grew that the high-transaction rate of physical collections, and reserve collections in particular, could represent a point of transmission for the virus within the student population. The large number of high-density study spaces contained within member libraries, with sizeable surface areas, could also provide points of transmission. The high-volume of face-to-face services provided by member libraries to their users meant that front of house staff were potentially exposed to a higher risk of infection than colleagues elsewhere within their institution. This last point produced increasing levels of anxiety amongst colleagues.

Place of the library on campus

The growing need to control and cleanse library spaces, and introduce a degree of social distancing amongst users and staff, all had a significant impact upon library operations. This was especially the case as the library, particularly amongst some of RLUK’s university members, remained functional and open, whilst other areas of the campus were increasingly closed.

Several members reflected on the strategic and symbolic importance attached to maintaining library services within their institution during this period, that the library was seen as essential to ‘keeping the show on the road’ by university leaders, and that with centrally located and sometimes iconic buildings, the library represented a sort of campus citadel. This was particularly the case amongst those institutions for which the library building provided one of the main areas of communal space on campus. The valuable social role played by library spaces, particularly for international students whose departure from campus was delayed, was noted by a number of members. The library’s continued provision of learning materials during the transition to online teaching and learning was seen as essential, with academics on social media coining the phrase of ‘panic borrowing’ in preparation for remote working.

The library remaining open whilst other parts of the campus closed caused heightened anxiety amongst some library staff. This in turn, for some members, led to the library seeing high-usage levels by students, particularly during the week 16-20 March as options for communal gatherings diminished elsewhere on campus. This occurred despite students being encouraged to leave campus. The upswing in usage amongst some members during the middle of the week 16-20 March reduced the library’s ability to enforce social distancing measures during such high-use periods. This situation eased towards the end of the week, following further instruction by universities that students leave campus’, and, at this point, usage numbers fell far below the normal seasonal levels.

Member libraries were ultimately well placed to respond to the ongoing spread of the virus and the potential impact that this could have on their buildings and operations. Many libraries had tested a variety of contingency scenarios in the days leading up to closure, including the remote working of key staff and establishing the hardware and software requirements to enable this.  With the ongoing spread of the virus, many member libraries instituted a series of incremental steps across early-mid March to reduce the exposure of library staff whilst maintaining operations. These steps included:

Each of these options and incremental changes required varying degrees of planning and their adoption often depended on a series of factors and decisions external to the library. This underlined the importance of the library being able to represent its views to university leaders.

Throughout this period, library directors and senior colleagues worked closely with university leaders to outline the ongoing role of the library, the possibility of streamlining services, and the potential need to close library buildings. Library directors conveyed the increasing anxiety of front-line staff and the importance of reassigning vulnerable colleagues from front-of-house roles. During this process, the library’s ability to deliver a significant portion of its operations online, the inability of some libraries to ensure social distancing due to periodic increases in demand, and the closure of other university libraries elsewhere were all important in making these arguments.

In particular, there was value in the ability of library directors to point to the closure of university libraries, initially internationally, and increasingly across the UK. As the situation developed, particularly following the issuing of OFS guidance on 17.03.20, libraries were able to point towards a greater number of their domestic counterparts as instituting closures. 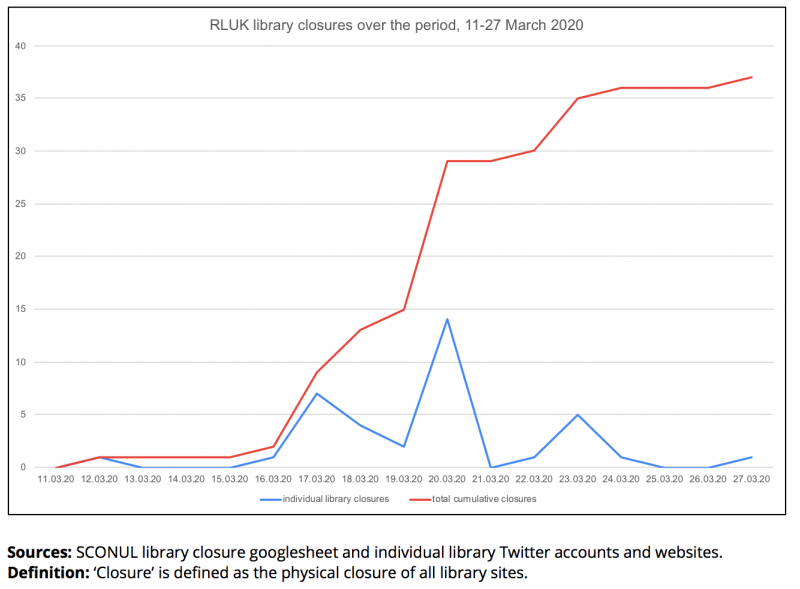 In making its case for closure, a number of factors were highlighted as being particularly important:

The impact of closure upon the collection

The response of members to the Covid-19 crisis has offered the RLUK community valuable evidence in regard to the digital shift being experienced within library operations, audiences, and collections. The physical closure of libraries and the movement of their operations online provided a unique opportunity to witness ‘the digital shift’ in action.

RLUK members responded swiftly and effectively to the ongoing spread of the Covid-19 virus. In doing so, they worked tirelessly to maintain levels of service whilst protecting the wellbeing of their staff and users. The experience of implementing incremental, and then full, closure of library sites and physical services demonstrated the centrality of the library’s position within universities, their institutions, and the national information and cultural landscapes. Library buildings were seen as central to the function of their institutions. This centrality, and the perceived need within some universities to maintain library operations, highlighted the importance of internal advocacy on behalf of the library, the essential role of library directors in representing the concerns of their staff, and the value of information sharing between library senior leadership via RLUK and other community lists.

RLUK will continue to work with its members during this uncertain and unprecedent period. Further work will be undertaken to chart the impact of Covid-19 on the operations of member libraries over the coming months, on which RLUK will report back to members.

[1] On 12.03.20 the Irish government announced the closure of schools and universities. This direct intervention meant that Trinity College Dublin Library closed on 12.03.20, although the university had announced that teaching would move online from 11.03.20. The discussion and decision-making process around closure appeared swifter than that witnessed within many UK universities due to this early government intervention.