The RLUK Conference 2019 took place at the excellent premises of Wellcome Collection on 20-22 March 2019. This year’s conference theme ‘Reshaping Scholarship: Transformation, Innovation, and Cultural Change’ was strongly linked to the RLUK strategy ‘Reshaping Scholarship’ which, having been launched in March 2018, has now moved to its implementation stage. Library and information professionals from across the membership and beyond came together to discuss some of the key issues that concern modern research libraries; these included the ways changing research practices and the proliferation of the digital affect libraries, the need for a cultural shift in values and practices, and the latest innovations in collections.

During the pre-conference workshops, delegates were invited to take part in discussions around best approaches and practices for facilitating openness in collections, the role of libraries in digital humanities, and copyright. The Conference was then formally opened by Prof. Tim Hitchcock (University of Sussex) who talked on the impact that the evolving library information structures can have on scholarship and the study of human knowledge. He argued that power structures tended to be more visible in the ‘traditional’ library whereas, in the digital sphere, lack of clarity around the way resources are created can lead to biases and misrepresentation of knowledge. How can we, then, increase visibility of the power structures in our digital collections and archives? Hitchcock suggested sharing collections via APIs and training scholars, while being more transparent about the decision making processes behind the building of digital resources.

Somewhat chilling observation from @TimHitchcock #RLUK19: in the traditional (print) library the power structures were visible, if not interrogated. Digital collections and sources, on the other hand, can easily conceal their assumptions, choices, drivers.

#RLUK19 the transition from physical knowledge arrangements in libraries, from catalogues to keywords, hides the structure of knowledge and shifts visibility, says @TimHitchcock

The IARLA panel that followed the opening keynote provided an international and collaborative perspective on some of the core transformational challenges that libraries are currently facing and which are related to the facilitation of openness in research and scholarly communication, the preservation of knowledge in the digital age as well as the cultural change that institutions and the profession, more generally, are undergoing. 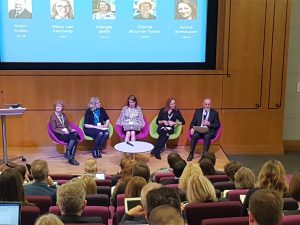 Subsequent presentations offered views on the growing role of the library as a partner in digital humanities – including the rising opportunities for contribution in the areas of publication, curation and preservation of data – and the ways research libraries need to evolve – in terms of organisational structure, services, and understanding of user needs – in order to successfully respond to future challenges. The day closed with a keynote speech by Charles Kriel [Kriel.Agency] who focused on social media and the role they play in perpetuating disinformation through approaches, such as ‘microtargeting’, which make it difficult for users to get a balanced view of a situation. Kriel’s talk offered plenty of food for thought and generated debate around the potential role of the library as a source of ‘truth’ and its responsibility of preserving our democratic values in the age of fake news. 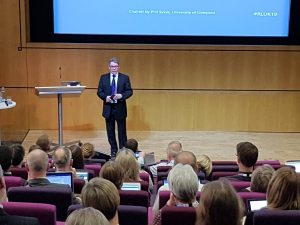 On the second day, our keynote speaker, Gwenda Thomas (University of Melbourne) questioned whether libraries can be neutral spaces based on her experiences at the University of Cape Town and the ‘cultural storm’ that took place there in 2015 and 2016. Although most of the professional values globally focus on the function of libraries as information gatekeepers rather than spaces, Thomas argued over the importance of seeing libraries as places were high levels of harmony and tolerance can prevail; yet, as her example of the debate generated by a piece of public art hosted at the University of Cape Town Library showed, this can often be a challenging task under tense circumstances.

Presentations and discussions throughout the rest of the day aimed to further unpack the conference theme as well as reflect on some of the issues raised by the keynote speakers up to that point. Therefore, the morning panel included talks on the possibilities of shared digitisation to avoid duplication as well as the need to improve metadata for making collections more easily accessible and discoverable; the impact and value of special collections; and the significance of understanding researchers’ information needs for improving library services.

Gwenda Thomas, Director of Scholarly Services and University Librarian at @unimelb, is starting day two of the #RLUK19 conference with a keynote on whether libraries are neutral spaces or places for the perfect cultural storm?

ASPIRATION: What does neutrality require in the context of an academic library? We need high levels of harmony and particularly tolerance. We need to provide a culturally safe space says Gwenda Thomas #RLUK19

Wondering about the straight faced portrayal of libraries as “neutral spaces” – yes, we strive for that but we must also acknowledge the uncomfortable reality that we are not entirely neutral. #RLUK19

In the afternoon, delegates had the opportunity to hear from the RLUK networks on how they support the RLUK strategy [more information can be found here] or participate in a long table discussion on the ‘neutrality’ of the library space. The last panel looked at the cultural change in services and practices that research libraries are experiencing to support open research and to integrate open content within libraries. The University of Lancaster showed how they use ‘data conversations’ as a way of engaging researchers, whereas the University of Sussex and Jisc raised the question of whether libraries can be fundamentally organised around a premise of ‘open’. The impact that this shift has had on the profession was also explored through a presentation by the University of Pittsburgh; the argument that new roles have started to emerge in order to effectively support changing research practices was illustrated through an example of a newly created position on digital and scholarly communication.

The third day comprised talks which aimed to assess the current state of library services related to research data management, discuss the role of libraries in research software, and look at alternative approaches to citation-based metrics for the purposes of widening access to research. A range of workshops on the topics of Artificial Intelligence (AI), collaborative collecting, open scholarship, and scholarly publishing offered the opportunity for more in-depth discussions and hands-on work.

We are very pleased that Bethany @nowviskie @CLIRDLF is able to join us at #RLUK19 to deliver the closing keynote on Digital Humanities at the grass roots. pic.twitter.com/0P1bYIhHM2

The final keynote talk was delivered by Rsch Assoc Prof. Bethany Nowviskie (Digital Library Federation, incoming Dean of Libraries at James Madison University) who shared her experiences as the Director of the Digital Library Federation and reflected on how the organisation became the community that is today through expanding and diversifying its membership and moving its focus from technology to people. Nowviskie highlighted the importance of ‘grassroots activity’ and community engagement for meaningful cultural change in our institutions that can lead to greater social justice. Thus, while going through that journey, she encouraged delegates to take into account the voices that are least heard and those who are left out as well as consider the potential negative impact that their actions, even though well intended, might sometimes have on some groups. The full talk can be read on Bethany Nowviskie’s blog.

Many thanks to everyone who participated at the conference and made it such a great success!

Presentation videos from RLUK19 can be viewed here.