Working towards Open Science in Europe: A Research Libraries perspective

The beginning of July saw the 47th LIBER Annual Conference (04th-06th July 2018) which took place at the LILLIAD Learning Center Innovation, University of Lille, France. Based on this year’s theme, a community of professionals from 440 institutions in Europe and beyond attending the conference were invited to re-imagine Research Libraries as Open Science Hubs and, then, through conversation, debate, and the employment of useful tools such as the LIBER Open Science Roadmap start working towards this goal.

Before the formal start of the conference, attendants had the chance to participate in a variety of workshops examining issues related to data protection, open science and data science, open access, funding and digital humanities and which were organised by the LIBER working groups. 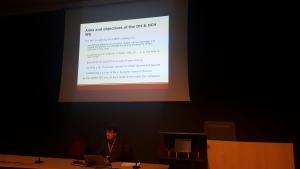 Having been involved in the LIBER Digital Humanities and Digital Cultural Heritage Working Group since its launch in July 2017, it was great hearing some of the working group colleagues report on the progress of the work conducted on the four strands of activity: enhancement of skills in the field of digital humanities for librarians; cooperation and relationship between libraries and research communities; roles of libraries in digital humanities and awareness raising in academic libraries; and recommendations for identifying and establishing policies and profiles regarding digital humanities’ portfolios. The group also shared their plans to design a survey with the purpose of collecting information that will help create an overview of Digital Humanities activities in European libraries. 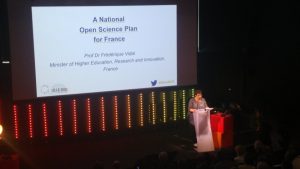 The conference was off to a strong start with the opening keynote by Prof. Dr Frédérique Vidal (French Minister for Higher Education, Research and Innovation) who presented a National Open Science Plan for France. Prof. Dr Vidal highlighted that broadening access to scientific research is key for developing a knowledge economy and taking advantage of relevant opportunities. She argued that open science is a common good and, if efficiently available, can provide a counterpoint to ‘fake news’. Yet, the introduction of new training, tools and services to support the open ecosystem is considered of paramount importance. Furthermore, as part of this plan, it will be mandatory for publically funded research to be published in open access format while, as far as possible, research data will be available to all as open data. It is worth adding that Prof. Dr Vidal highlighted the value of qualitative methods in evidencing quality and impact – these should be used alongside quantitative data to understand the effect of open scholarship and related services. 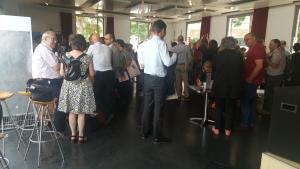 The Knowledge Café (Part I)

The afternoon panel sessions aimed to look in more detail at some aspects of the broader theme of open science. These included talks on the progress of national and European negotiations with publishers, the challenges faced by libraries across Europe in the area of Research Data Management (RDM) as well as the approaches employed for tackling them. Moreover, reflections on digital collaborations with the purpose of advancing and facilitating open research, and the experiences of academic libraries in working towards that goal were also shared through relevant presentations. 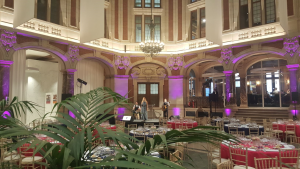 The Knowledge Café (Part I) that followed offered conference participants the opportunity to interact with representatives of the LIBER working groups and committees and learn about their work. The day closed with a conference dinner at the excellent premises of the Chambre de Commerce et d’Industrie in the heart of Lille. 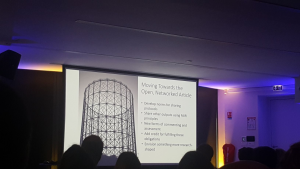 Louise Page introducing the concept of the Open, Networked Article

In the morning, Page focused on the responsibilities of publishers in the open science movement. Starting from the effect that the advent of the internet had on academic publishing, she talked about the problems that the scholarly communication ecosystem faces today which relate to access to research outputs and their assessment. As she argued, current business models around open access do not serve the global economy and invited the audience to consider how change can be achieved. Within this context, Page introduced the concept of the open, networked article and suggested that, in order to improve current circumstances, there is a need for more co-operation, improvement of incentives for open access publishing (e.g. rewarding failure and better metrics), and publication of open data, based on FAIR principles and standards. 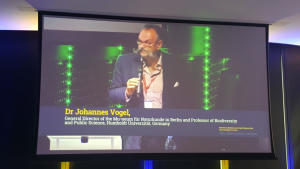 Prof. Dr Vogel, in the afternoon, presented citizen science as a model for achieving innovation through participation. He argued that we need scientifically literate citizens to counteract modern global challenges, such as populism, and that citizen science can be part of the priorities for system change; the list with the issues that should be taken into account when working towards this goal also included reviewing the reward system, measuring quality and impact, and publishing fair open data. Finally, Prof. Dr Vogel talked about initiatives, such as the Open Science Policy Platform and relevant work that is being conducted in the Netherlands, as significant examples which have the potential to bring change and have a positive impact on society through leading to open innovation and sustainable living. 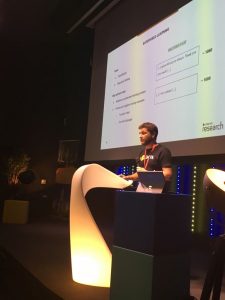 The panel discussions that took place on the day were equally informative and thought provoking; these addressed matters not only around openness in scholarly publishing, research data and infrastructure, but also looked at the role of libraries as trainers and educators and considered the needs of users in the emerging open science movement. A poster session offered the ideal setting for directly interacting with other delegates and learning about their projects while, during the second part of the Knowledge Café, conference participants had the chance to hear updates from members of the LIBER groups and committees regarding future strategic activities and share their feedback. An evening reception at the beautiful building of the Palais des Beaux Arts de Lille successfully closed the second day of the conference.

The morning of the final day comprised panel sessions which further examined issues around open access and the next generation technologies and methods employed by libraries to serve their communities. Dr Alan Akbik (NLP Group at Zalando Research) delivered the last keynote on the topic of text and data mining (TDM) in industrial research. Dr Akbik provided an overview of the possibilities around technologies and practices that organisations holding large amounts of text data, such as libraries, might be interested in exploring. He argued that massive amounts of text data can better train machines and talked about the experience of Zalando in using TDM to better understand their customers’ needs; the fact that the multilingual text analytics toolkit used by Zalando is partially open source was of great interest to the audience.

An awards and closing ceremony marked the end of another year’s successful conference, while next year’s host, Trinity College Dublin, invited delegates to Ireland for the 48th LIBER Conference which will be organised in collaboration with CONUL, the Consortium of National and University Libraries.

For more highlights from the conference visit LIBER’s webpage.